Starting in 2006, Twitter was known as a micro-blogging site, offering users 140 characters in which to get across bite-sized thoughts and ideas. Although there are only 330 million active users, Twitter is still one of the most high-profile social media channels, known for breaking news, trending topics, celebrity opinions and even activist movements. Hashtags are key on Twitter, pulling together conversations, topics of interest or breaking news. 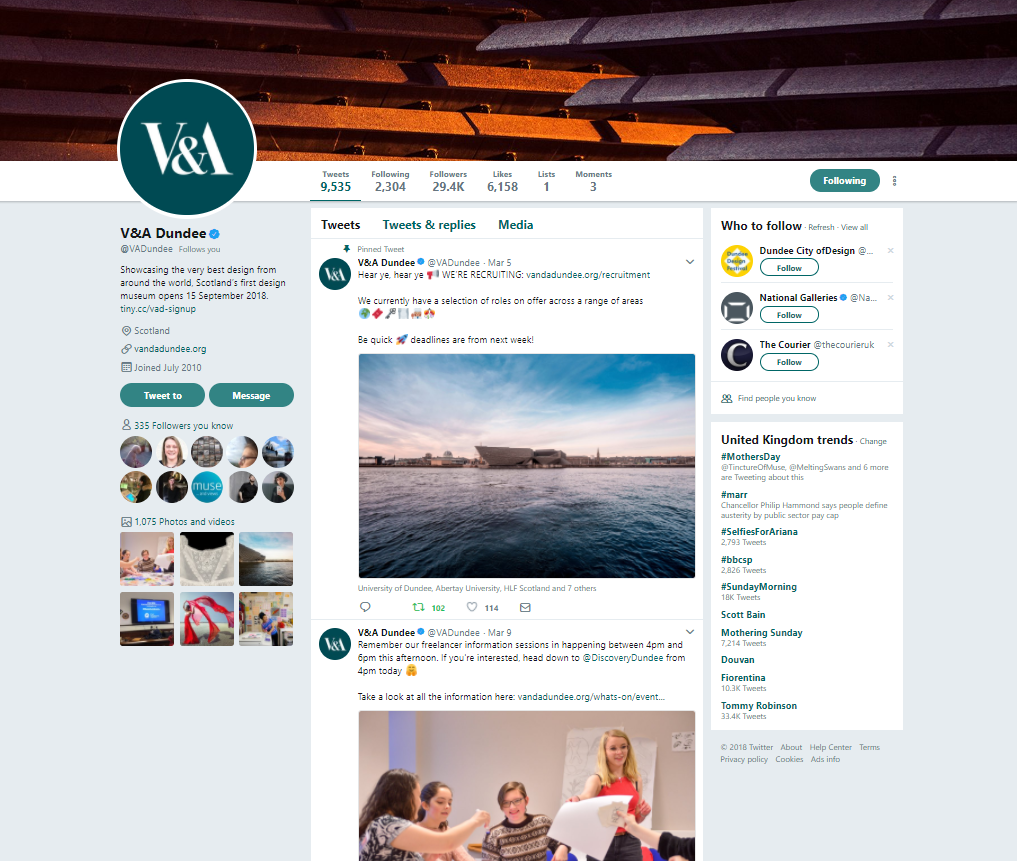 Example of a museum’s Twitter profile viewed on desktop.

Twitter mostly looks like it did when it started but has increased its functionality year on year (not always to the delight of its users). Now, with each tweet Twitter gives you 280 characters to play with, up to four images or one video or GIF to upload, and even a poll function so you can survey your audience. You can tag other accounts into tweets, create “threads” of tweets to form a narrative, and compile your own list of tweets (yours and other people’s) in the form of Twitter Moments.

Some people are happy just browsing other people’s tweets without engaging with them. For those who want to, Twitter offers a few ways to interact. You can “like” a tweet, usually indicating approval or support. Many users bookmark tweets this way, but Twitter has recently rolled out a separate bookmarking function. 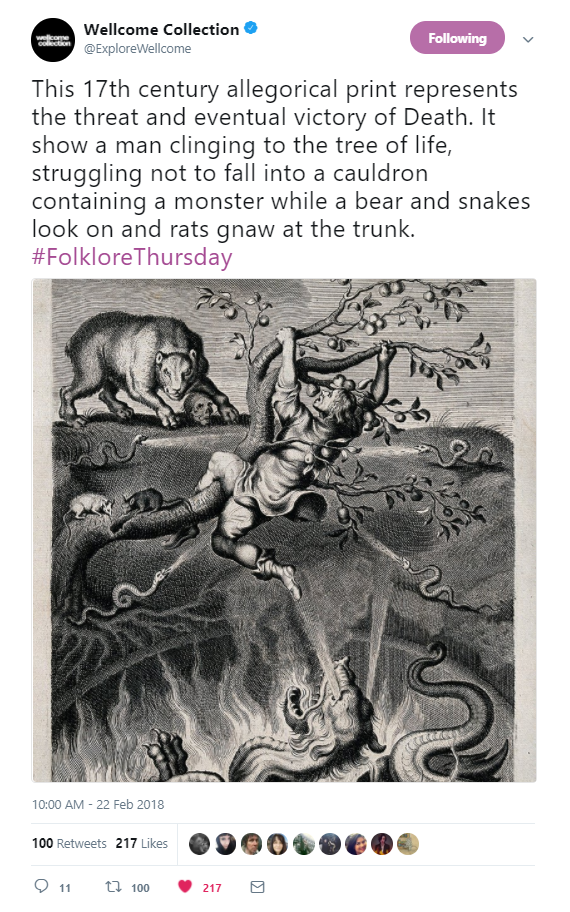 If someone’s tweet really chimes with you, or you feel the need to spread or amplify that content, you can retweet it, which posts that same tweet to your followers (clearly showing that it’s someone else’s post, but that you’ve retweeted it). You can quote tweet it instead: this embeds the original tweet underneath a new one you can write. This is useful if you want to add something to the point, or even if you want to call it out.

Everyone on Twitter has a handle, which is how you tag in other users and mention them in tweets. This way, other users can see who you’re talking about, check them out and follow them if they want. The account tagged in gets a notification that they’ve been mentioned and can then also get involved. 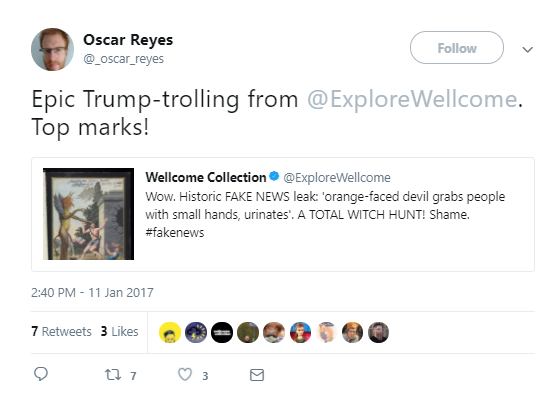 Example of someone quote tweeting. The tweet appears below the newly added statement. See also Wellcome Collection’s handle (@ExploreWellcome) used to tag them in the tweet. See Oscar Reye’s Tweet

Hashtags are used to pull many otherwise separate tweets together and you can come up with your own or jump on others (if it’s relevant). Most museums decide on a hashtag for their exhibitions or big events, but the key is to make them clear to the audience so most people know which one to use. You may want to tweet out an often-overlooked object every Friday and make it into a little project; using a unique hashtag will mean people can use it to see all the past posts from that series. 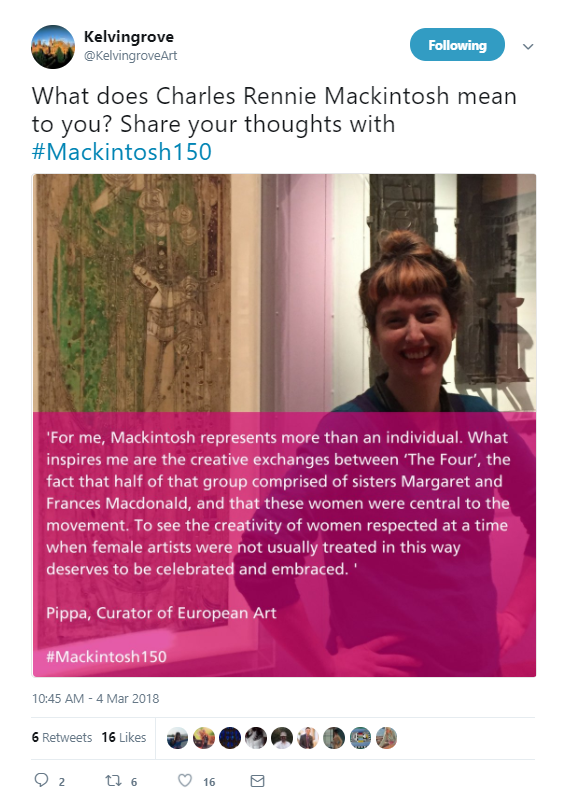 An example of a museum using a hashtag, in this case #Mackintosh150. People can click on the hashtag to see other stories and conversations taking place around that subject, and also include it in their own tweet, to add their voice to the discussion. See Kelvingrove’s tweet

Some hashtags become so popular that they trend, surfacing that topic to Twitter users across the country or the world. These can be national calendar events (such as National Book Day or LGBT History Month); they can be breaking news stories (what has Trump done now?); and they can be one-off or annual events with the world’s eyes on them (like the Oscars or the release of Marvel’s Black Panther). When relevant, jump on these and take part in the conversation. This can be done in jest or when you have something that genuinely ties into it. The way you do this (or if you do it at all) really depends on your museum and tone. Some organisations can get away with a lot; others less so.

Twitter is where conversations happen. Whether it’s people live tweeting television shows, discussing news, politics and other current events, or talking about why museums mean so much to them, Twitter is about sharing ideas, opinions and funny memes that go viral.

Museums can reach users individually on Twitter, and vice versa, often leading to insightful and meaningful exchanges. This can be by informing a potential visitor that the museum is open or has something they’re looking for. Or it can be by hearing a new perspective on your collection from a point of view not often addressed by the museum itself.

Example of a tweet (top left) and how Twitter breaks down the tweet’s “activity”, showing the different kinds of engagement received.

How to access/use it

A museum’s Twitter profile is the same as any other user’s. You set it up by choosing your handle (make it clear, unique and obviously you), adding your profile photo and header image (if you want to), add a description of the museum and a link to your website.

You can access Twitter on desktop or on the app. Functionality is almost identical on both, so it’s up to you. You can also access Twitter via third parties, such as Hootsuite or Tweetdeck. These are tools to allow you to manage your museum’s Twitter presence in different ways, but they are more of a next level step.

It’s a good idea to follow as many relevant accounts as you can. Visit another museum’s profile (a good start is another museum in your town or one with a similar collection or theme) and then look at who they’re following. You can handily follow any accounts you want to from here and build up your network. Those accounts will be notified that you’ve followed them (they’ll hopefully follow back), and others who follow them may see your content as a result.

In addition to other cultural organisations, you might want to follow partners and other stakeholders, local interest groups or high-profile accounts relevant to your museum and its mission.

Get in touch with other organisations, let them know you’re on Twitter and ask them to help amplify your presence. Interact with them (like, retweet, etc.) to make your presence known and join in with relevant discussions or conversations. All of this will help people know you are there and that you are active.

When it comes to your own content, think about what makes your museum unique and the kinds of things you could post that people won’t see anywhere else. Make sure you use good visuals and pithy, informative or plain writing (not mutually exclusive). And off you go!

Play well with others

Some of the best museum social media content involves exchanges between organisations. Whether it’s museums wishing each other a merry Christmas with fun GIFs or competing to find the most grisly baby-related objects in their collection, audiences enjoy when their favourite museums engage in light banter and fun exchanges. Twitter is perfect for this, allowing you to tag museums in, use a hashtag to follow the discussion and create threads of fun conversations. 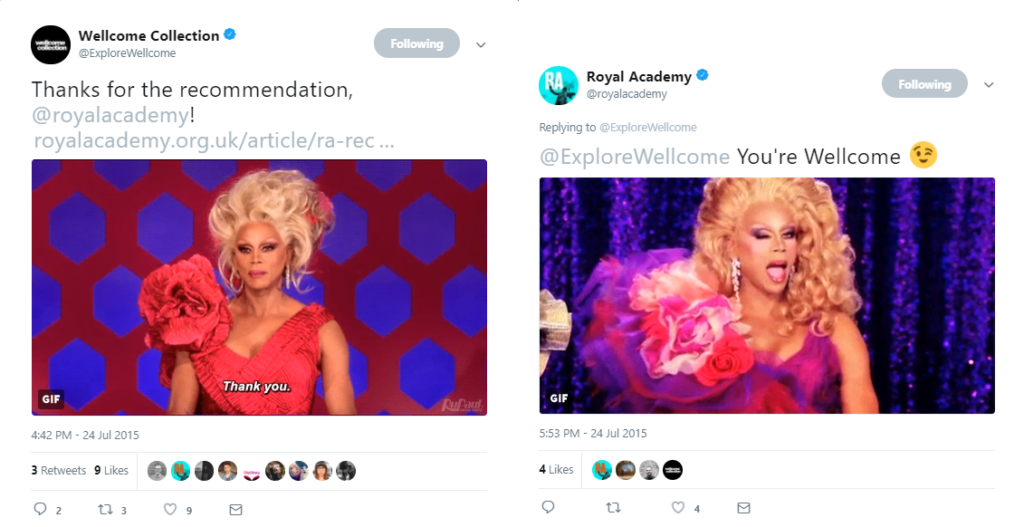 Museums talking to each other lets them each have a bit of fun and show their personality a bit.

There are regular hashtag event days (often spearheaded by Culture Themes) covering a specific topic; the idea is that cultural organisations around the world use the hashtag to join the discussion. Whether it’s Museum Cats or Museum Stairs or Museum Halloween, there’s usually a way for your organisation to join the fun. It’s great when starting out too, because you can see how others do it, whilst adding your own voice to the mix reaching more people than you otherwise would, as your content gets discovered through the hashtag. But since you’re not doing it alone, you can feel more empowered to try things out. 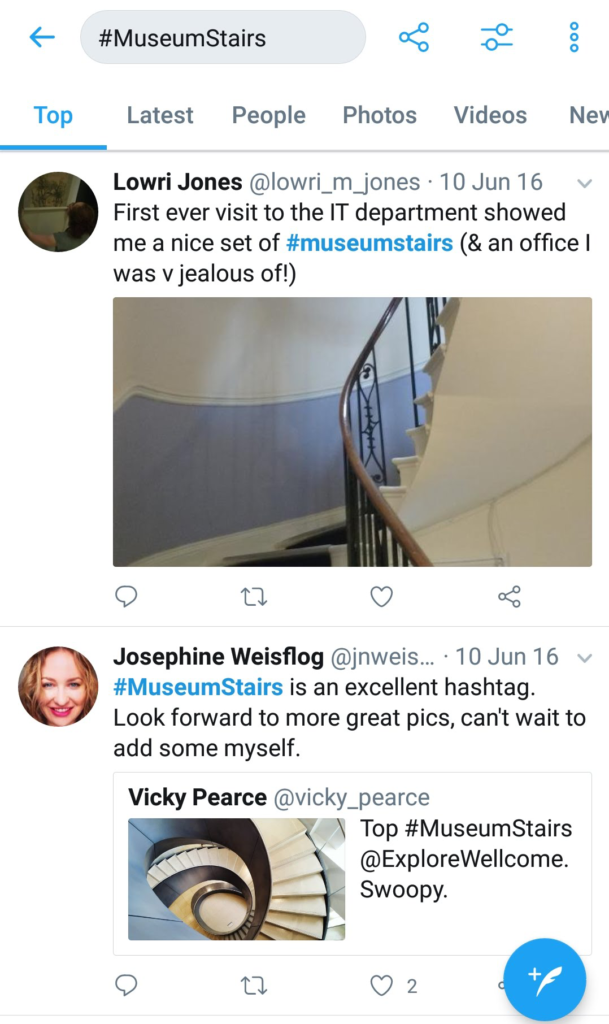 An example of one of the hashtag events, in this case #MuseumStairs.

There is a dark side

Twitter can act as a platform for hate and bullying, just like it can be a beacon of tolerance and inclusivity. Blocking and reporting accounts guilty of this behaviour helps, though Twitter themselves need to do more. Despite bots and trolls making life unpleasant for some (usually targeted at women, POC, members of the LGBTQ+ community), most people’s experience of the platform won’t be as negative. This is not to downplay the severity of that indefensible activity; but the bad eggs are (in most cases) far outweighed by interesting, engaging and supportive people.

Twitter offers free stats, called “Analytics” on desktop. Using this feature, you can interrogate the performance of your tweets, including tweets mentioning you from others. The view of these stats is quite limited, but does give you information like link clicks, likes, retweets, profile clicks, replies and so on, so you can get a better understanding of how your content is performing and in what ways. This will help inform your approach going forward.

National Museum of Women in the Arts